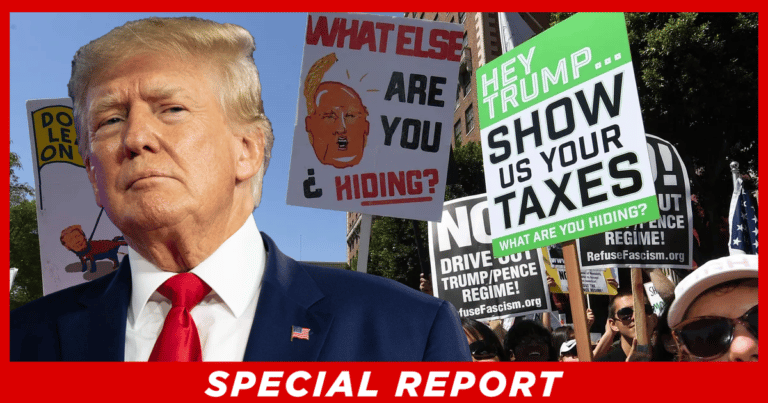 After fighting for years to get them, Democrats got their grubby hands on Trump’s tax returns. We never really understood why they wanted them so much. Did they think they could prove he didn’t pay taxes–when most of the rich liberal elite don’t either?

News has come out that in 2020, Trump didn’t pay federal income tax. Democrats were ranting and raving, claiming Trump was using a “tax shelter” scheme to avoid paying what he “owed” to the government. But, as it turns out, Democrats were wrong yet again.

Despite pulling in nearly $11 million in interest from investments in addition to his nearly $400,000 salary, Trump did not pay income taxes because he also reported a $16 million loss from his real estate businesses. That loss put the former president almost $5 million in the red for 2020…

“His old losses are not ‘tax shelters.’ They were losses that he incurred that are being rolled over year to year. If he never incurred the losses, he would not be able to take them,” Steve Goldburd, a tax attorney and partner at the Goldburd McCone law firm in New York, said in an interview.

Trump did not pay income tax in 2020, because he lost $16 million in his real estate business. Even though he pulled in $11 million from investments, he was still in the red that year by $5 million.

That’s a lot of money to lose in one year. Because of that, the government couldn’t tax him on his income, because technically, he didn’t earn money in 2020, he lost money. Democrats, who don’t seem to understand how money works, claim he was using a “tax shelter” scheme to avoid paying taxes.

Except, do you think you can pay taxes when you lose $5 million in a year? Yeah, I don’t think so. Tax experts explain that it was a real loss. Nobody can be expected to pay income tax when, in reality, they didn’t make any money.

Yet Democrats online will claim Trump didn’t pay taxes in 2020. And that lie will spread like all the fake rumors the left has spread about Trump since 2016. Only if patriots spread the truth, that Trump lost money serving the country during his last year in office, will this lie be stamped out.