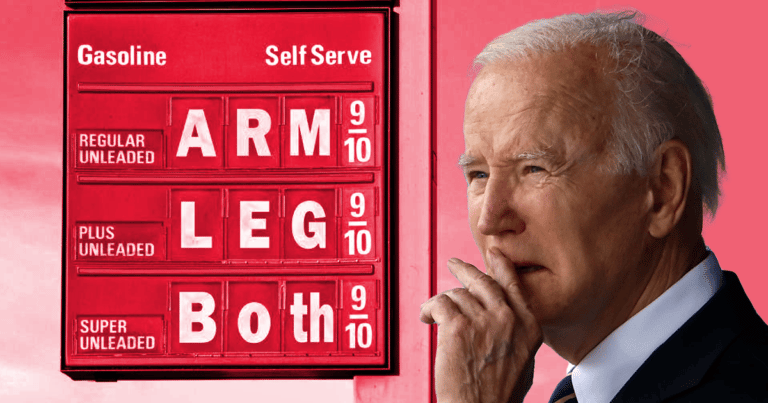 The stock market is dropping at the end of this week, as more signs appear that we are in a recession. Inflation continues to rage, largely thanks to reckless spending by Biden–and his refusal to address the gas price crisis.

Gas prices are going up and now OPEC announced major cuts. There are fewer and fewer options around the world for fuel, with Europe bracing for a very bad winter. The obvious solution, of course, would be to open up America’s untapped energy resources.

Instead, Biden is eyeing to make things unimaginably worse.

In July, the DOI unveiled the plan which gutted a Trump administration proposal, ruling out any leasing in the Atlantic or Pacific and opening the door to an unprecedented scenario where no lease sales would be held through 2028.

If there was any doubt that Joe Biden is an America-last president, this should kill them off.

As America–and most of the world–is suffering from an energy crisis, Biden is actually considering banning all offshore drilling leases.

This is the work of a madman. When someone is dying for water, you don’t fill the well with concrete.

But that is exactly what Biden is doing. America can easily end this gas price crisis. We can put Russia, Iran, and OPEC in their place.

All we have to do is actually start drilling for oil. But the Biden administration has awarded fewer leases than any other president since Truman in the 1940s.

That’s pathetic, I don’t care who you are. Biden and his administration have admitted they are doing this deliberately, to force Americans to buy EVs.

But those Teslas aren’t worth a damn, if you can’t get electricity to charge them. Americans will be forced to suffer through a horrible winter since prices to heat their homes will go through the roof.

Just imagine how much wealth would flood the country, if we were actually allowed to drill? Not only would energy prices go down here, but we would be selling oil to Europe, Asia, and all over the world.

For Biden to be doing this has nothing to do with environmentalism. It has everything to do with his party’s mandate to enrich globalists and deprive Americans of success.

Does that sound crazy? No crazier than banning drilling when we are in an energy crisis.