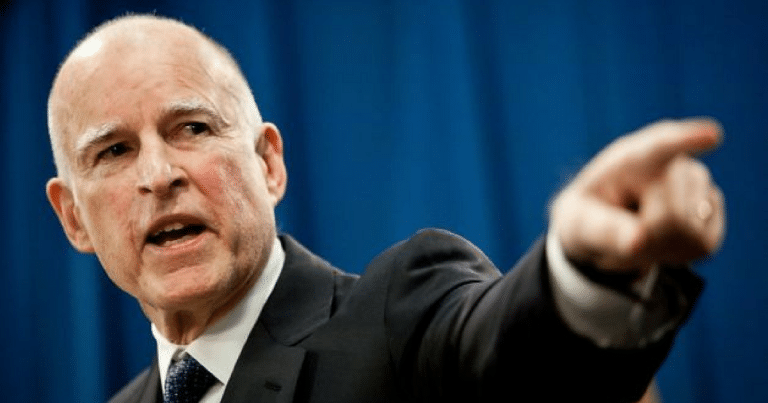 In the age of Trump, perhaps the biggest blockade to progress and wealth in America is California. We know that many of you live in sunny CA. You love your country and the President. Yet the numbskulls in Sacramento don’t share your sentiments. That’s why they’re risking $288 million.

Jerry Brown, the governor of CA, has regularly opposed the President. He signed into law a bill that makes the state a sanctuary for illegal aliens. He has called Trump voters cavemen. And of course, his tax plans are driving businesses and jobs from the state.

Now his latest move directly opposes the Trump administration and will hurt the rest of the country.

California officials plan on preventing the federal government from transporting oil and gas using existing pipelines in the state, according to a report Wednesday from The San Francisco Chronicle.

Officials on the California Coastal Commission are urging the federal Bureau of Ocean Energy Management (BOEM) to rescind plans allowing companies to drill for oil off the coast. They are still hoping for an exemption from the oil drilling plan, that Florida has received…

California officials can therefore control pipelines, transportation of materials, terminals, and refineries built in coastal areas. The federal government could pull out the U.S. Constitution’s supremacy clause to create a regulatory framework that would override California law.

I don’t understand anyone who opposes off-shore drilling. It will bring energy independence and dominance to the country. It will create wealth and jobs for Americans. Not only that, but it will lower energy costs, as more resources flood the industry.

California lawmakers claim it’s harmful to the environment. But just as in any other industry, it is safe and effective when required rules are followed. Liberals attack oil drilling, simply to undermine an entire industry, while expanding the power of government.

We shouldn’t be surprised. Democrats hate privately owned businesses and wealthy, private citizens. They want the government to run everything, even the cash in your wallet.

But in this case, I don’t think they are going to succeed. The Trump administration has the power to overturn their policy. They can easily bring this matter before federal courts, even the Supreme Court, which will judge in favor of the law.

California liberals will have a hard time explaining why they are crippling U.S. energy, harming jobs, and weakening our economy.

I guess they can say they want to save the dolphins.