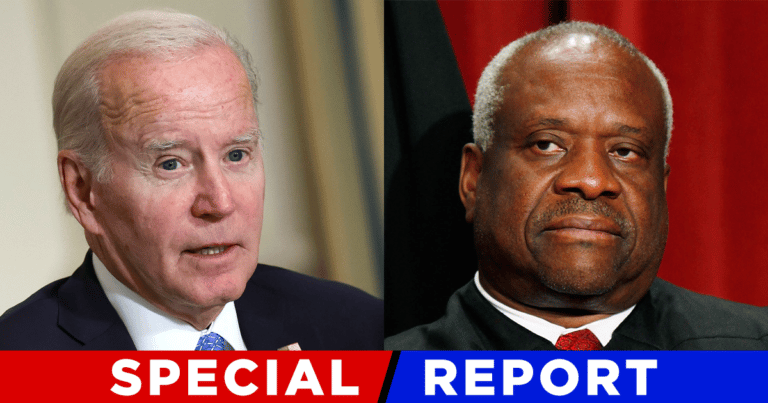 This week, we learned that Trump’s legal team was calling on the Supreme Court to intervene in this Mar-a-Largo case.

They requested Justice Clarence Thomas to require Biden’s DOJ to allow the special master to review 100 documents considered “classified.” The agency has refused to hand those over.

And it looks like the justice is moving fast. He just issued this demand to Biden’s DOJ.

Woah. It appears the Supreme Court justice responded quickly to this request. Some critics weren’t sure if the court would respond at all. Justice Thomas is giving the Department of Justice a small window of time to respond to the petition from Trump.

They have until October 11th to make their case before the court decides. Biden’s heavily politicized Department of Justice led an unprecedented raid against Trump’s home in the summer.

Even though presidents have long held onto documents from their administration, suddenly Biden’s White House is accusing Trump of breaking the law.

Many believe this is the continuation of the left’s witch hunt against the 45th president. It is hard to overlook the political bias of this DOJ. Biden’s Department of Justice is going after his former political rival–and perhaps future 2024 rival.

Yet the media doesn’t care about this glaring conflict of interest. All they seem to care about is finding something to pin on Trump–to prevent him from running again.

Americans have been outraged by what looks to be a shocking abuse of power. Democrats appear to be using the DOJ to attack their political rivals. And nobody in the media cares. This latest episode could give Trump a bit of a victory. If the court rules the special master can review those documents, it can diminish the DOJ’s accusations. Trump has maintained that all the documents at Mar-a-Largo were declassified while he was in office. But he also believes Biden’s FBI could have planted documents to frame him.