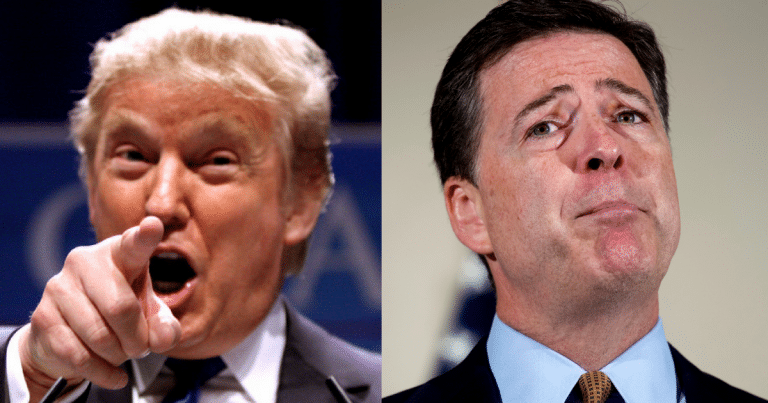 Over the last few weeks, the liberal media has been gushing over James Comey. The former FBI director has released a book, detailing his time in the bureau.

Mostly, it aims to slander President Trump—but unfortunately for him, it looks like he’s turned the gun on himself.

To date, Comey has not shown any evidence Trump broke the law. That’s what Democrats were hoping for. Comey can insult the President all he wants. But if he can’t prove Trump “obstructed justice,” it doesn’t matter. Most Americans are sick of seeing Comey’s face.

Now it looks like Comey might have done more than slander the  Commander in Chief. He leaked sensitive material to the press. How sensitive? Classified, naturally. That could land the former director in the big house.

President Donald Trump commented on the public release of the memos by former FBI director James Comey, asserting that they proved that he leaked classified information…

James Comey Memos just out and show clearly that there was NO COLLUSION and NO OBSTRUCTION. Also, he leaked classified information. WOW! Will the Witch Hunt continue?

“Former Director Comey never wrote that he felt obstructed or threatened,” read a joint statement from House Judiciary Chairman Bob Goodlatte, House Oversight Chairman Trey Gowdy, and House Intelligence Chairman Devin Nunes upon the declassified release of the memos. “While former Director Comey went to great lengths to set dining room scenes, discuss height requirements, describe the multiple times he felt complimented, and myriad other extraneous facts, he never once mentioned the most relevant fact of all, which was whether he felt obstructed in his investigation.”

The memos prove Trump never tried to obstruct Comey’s investigation. That was the major accusation leveled by pathetic democrats. With the firing of Comey, they claimed Trump tried to undermine FBI investigations. But even Comey’s oddly detailed memos about Trump do not suggest he ever did that.

What has this told us? Comey released classified information to the press. He leaked these documents to a friend in Harvard, who then sent it to the media. That’s pretty illegal. But there’s plenty of history that shows how “important” people don’t get into trouble for this kind of thing.

After all, Hillary was responsible for classified documents entering foreign hands. Where are her charges?

The only way Comey can get what he deserves is if our Department of Justice presses charges. But Jeff Sessions has been shockingly quiet. Where are all the heads that were supposed to roll?

The last administration was run by crooks and con artists—Comey included. But not once have we see any of them—Obama, Clinton, or Lynch—get justice served.

Let the Justice Department know they need to start doing their job, shutting down the witch hunt against the President and pursuing real corruption.