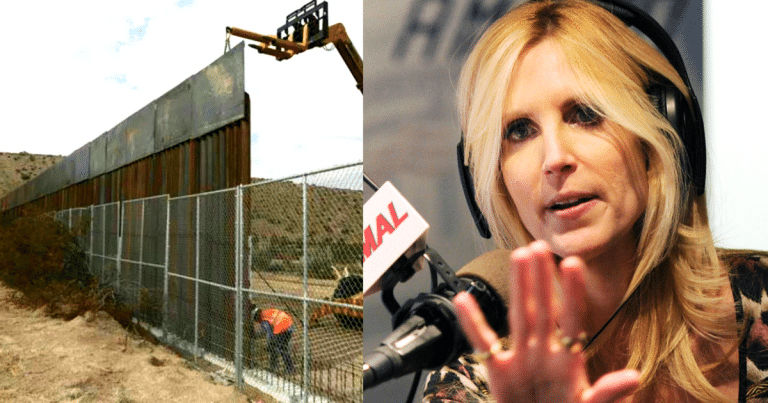 Conservative firebrand Ann Coulter has never been known to back down from a fight. Probably because she’s almost always right.

During the 2012 election cycle, she stated that if the GOP nominated Mitt Romney, they would lose the general election. Well, we all know how that turned out.

Another example: When she appeared on the liberal talkshow Real Time with Bill Maher back in 2015, she boldly stated that Donald Trump would not only be the Republican nominee, but that he would win the general election.

The audience and panel laughed in her face at the time, but on election night they definitely weren’t laughing!

Now Ann is taking on the latest spending bill, and vented her frustrations with it on Justice with Judge Jeanine. While lamenting the bill’s complete lack of funding to build the border wall, Ann came up with the perfect solution.

Coulter, frustrated by Trump’s decision to sign last week’s omnibus spending bill, said construction of such a wall was within his power as president given under the Constitution he was responsible for the country’s national defense.

“On the day after his inauguration, it’s his authority under the Constitution that cannot be taken away from him by any legislature, by any court — I’m quite confident the Supreme Court would uphold this — to defend our borders. I mean, he has — last war that had a declaration of war from Congress in it was World War II. And we engage in a lot of military actions around the world. I think it can be done right on our border for defense. Have the Seabees do it.”

Using the Seabees (The United States Naval Construction Battalions) would be an incredibly effective use of our military. Instead of ‘helping’ people in some far away country who may not really want our help, we can help ourselves by working to stem the invasion of criminal illegal aliens.

President Trump must have watched the show that night, because he tweeted this point the following morning.

Because of the $700 & $716 Billion Dollars gotten to rebuild our Military, many jobs are created and our Military is again rich. Building a great Border Wall, with drugs (poison) and enemy combatants pouring into our Country, is all about National Defense. Build WALL through M!

It seems President Trump is planning to take the money allocated to rebuilding our military and will use it to finally build our big beautiful wall, all in the name of providing for the common defense.

If Ann’s past is any indication, her prediction that the military will build the border wall is all but a certainty. Checkmate, liberals!