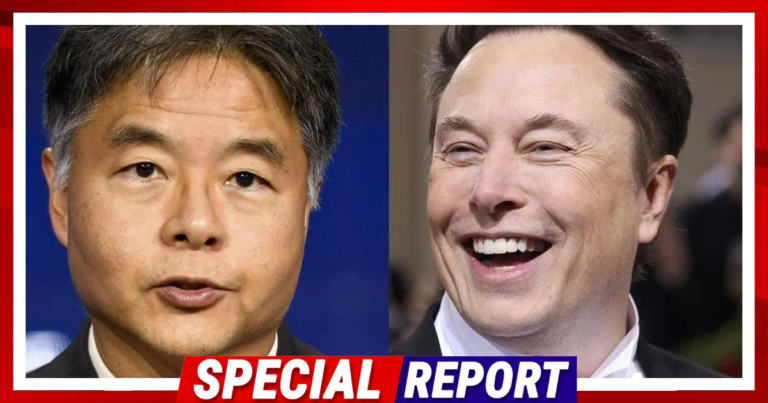 It’s no secret Democrats are panicking over the many damning revelations coming out of the Twitter Files. Elon Musk handed thousands of internal Twitter documents to independent journalists. These journalists have been exposing what the former execs were doing to silence free speech–working with the government to help Democrats.

One Democrat representative tried to discredit the tsunami of information coming out of the Twitter Files. He claimed, in a tweet, that the information being posted was false. But his own claims were fact-checked by the Twitter community. Elon himself called out this man’s comments. The Democrat was so shamed, he was forced to admit defeat by this one move.

California Democratic Rep. Ted Lieu deleted a tweet after he was called out by Twitter CEO Elon Musk on Monday for posting false information regarding the latest release of “The Twitter Files.”

Musk replied to a comment in the thread challenging Lieu, “Ted is linking to misleading data,” and tagged “Community Notes.”

The latest release of the Twitter Files posted by Zweig illustrated how the federal government allegedly “rigged” the “COVID debate” by “censoring info that was true but inconvenient to U.S. govt. policy,” and “discrediting doctors and other experts who disagreed,” as well as “ordinary users.”

This is a pretty big deal. The latest Twitter Files report revealed that the Biden administration was pressuring Twitter to censor COVID-related content that the White House didn’t like. The revelations put Biden in a very bad situation since he was violating the First Amendment to force a private company to trample Americans’ freedom of speech.

Democrat henchman Ted Lieu tried to go to bat for this failed administration in a reaction to the Twitter Files. But in the tweet, he made claims that were untrue–including odd claims about child deaths. Musk himself called out the Democrat’s dishonesty, calling on the Community Notes service to fact-check him.

Rep. Lieu was so shamed by the fact he was getting called out for lying, he quickly deleted the tweet. Funny how he expected to post false information and get away with it, huh? Probably because he had gotten used to doing that under the former Twitter leadership.

Lieu thought he could protect Biden’s shocking violations of our freedoms by posting misleading and largely inaccurate information. But he got caught. Interestingly, Lieu did not correct himself, apologize, or admit he was wrong.

He just deleted the tweet, as if he never wrote it. Nice try. But we remember how you tried to mislead the public.

And so does Elon.