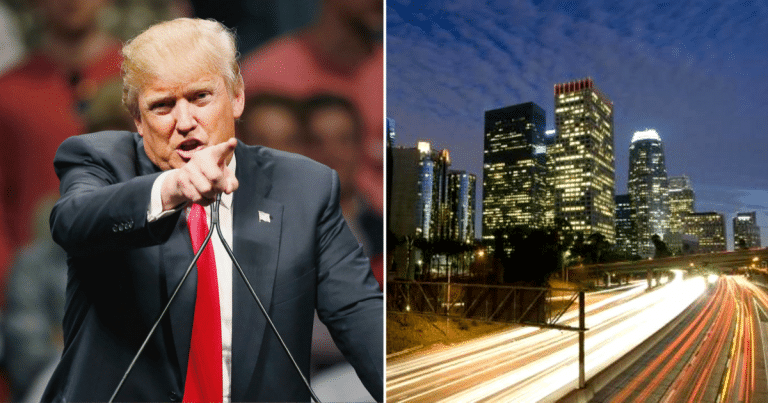 America is winning, thanks to President Trump. Throughout his first year, we’ve only seen win after win. The economy is soaring. Stocks are breaking records every month. Unemployment is down. GDP is up. And the year closed out with a huge tax cut bill.

Yet liberals refuse to give Trump credit. They continue to be the “opposition” party. Opposition to what? Success? Safety? Stability? The left’s tired and empty attacks on Trump are wearing thin. They have zero excuses to blocking the President. They continue to do it, though, at their own peril.

California is leading the charge. The stupid state has implemented “sanctuary policies” that have endangered Americans. Their leaders put criminals ahead of citizens.

So it comes as no surprise that the federal government is dropping the hammer on them. Finally.

This year, L.A. officials applied for more than $3 million in federal funding…

The request was denied.

The U.S. Department of Justice hasn’t offered the LAPD an explanation of why the department didn’t receive any of the $98 million in grants recently awarded to scores of law enforcement agencies across the nation. A spokesman for the federal agency declined to comment when asked by The Times last week.

But after the Trump administration’s repeated threats to withhold federal money from cities that don’t cooperate with its immigration crackdown, some LAPD officials said they believe the move was retaliatory — and a troubling sign of what could come.

Um, yep. That’s definitely what’s to come. California cities have continued to insult their own people. They protect illegal aliens at the cost of American lives. Do they really think the federal government would support that?

Los Angeles in particular has been pretty nasty. From Mad World News:

In September 2017, the Los Angeles City Council turned up its nose at Trump, defying his warning that cities which harbor illegal aliens and thwart immigration officers from enforcing arrests shouldn’t stick their hands out in expectation of federal funding. Ironically, they were surprised when Trump kept his promise to bring down the hammer of justice, hitting them where it really hurts.

Liberals opposed Trump, claiming he was racist and bigoted. Yet this past year has proven otherwise. He is a smart negotiator and strong leader. His influence is doing amazing things for this country. All the predictions liberals made in 2016 were completely false.

Have they learned the error of their ways? Of course not. They continue to oppose Trump. But for what? To protect criminal aliens who are hurting the country.

This is only the beginning. The federal government has every right to deny funds to Los Angeles. Imagine the audacity of that city. They insult the President for a year, then expect a payday! The days of that kind of stupidity are long gone.

But I’m not holding my breath.