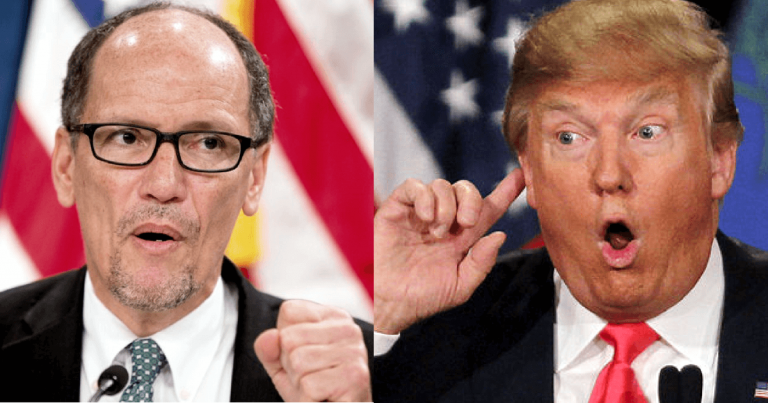 The Democrats just crossed a bright red line, and the person Tom Perez introduced as the President is turning heads.

The criminal scum who run the DNC are at it again. From the very beginning of Trump’s presidency, they’ve proven they don’t believe in our democracy or government.

They openly protested the results of a free and open election. Then they went on to threaten, bully, and coerce the Electoral College, hoping to stop them from confirming Trump’s victory. Some even rioted during the Inauguration, leading to over 200 arrests.

Since then they’ve haven’t stopped talking about impeaching Donald Trump. Over what? Real evidence? Of course not, only the insane imaginings of a deranged and hateful political party. They oppose every measure Trump makes to make America great again. That even included the tax cuts bill; not a single Democrat supported it.

Now the crooked chairman of the most corrupt party in the country announced Trump is not the “real” president. Instead, he decided who is truly in charge.

“Let’s give it up for the real president of the United States,” Perez said at Thursday’s fundraiser, Politico reported.

Obama reportedly then told the crowd of Democratic donors that they are “right to be concerned” about Trump’s presidency.

The Democrats are truly out of touch with reality. They don’t even care that America rejected Obama’s legacy by electing Trump. Most of what Trump promised during the election was to undo the terrible leadership of the Obama administration.

Millions of Americans were sick of the terrible decisions Obama forced on our country. Americans were sick, out of work, and struggled for even basic needs. They had been harassed and abused for long enough. Hillary Clinton represented more of the same. Trump offered a way out. America picked him as a response to Obama.

Yet Perez—a man with zero credibility or accomplishments—has decided Obama’s still in charge. That’s good. You’ve proven you don’t even grasp the concept of our government and elections. Plus, you want to drag your party—and country—into the past. Obama’s done. He’s not coming back. The fact that Perez and the rest of them cling to his like a faded relic is because they have no one else.

There is nobody that can win over the DNC—and the rest of the country. All they have left are con artists, socialists, and crooks. Extremists are taking over the party, dragging it to the bottom of the ocean.

Democrats have long ago parted with reality. Perez only further proves it.