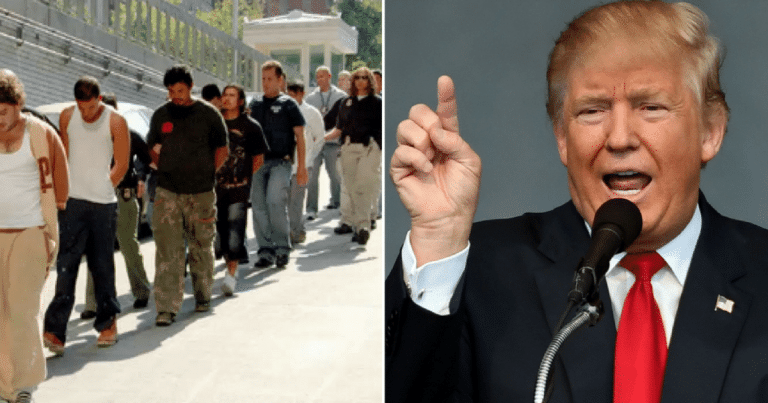 Criminal illegals never thought Trump would have the gall to arrest them. Well, he just did. All 150 of them.

Perhaps the biggest crime against justice these days (aside from Hillary walking free) are sanctuary cities.

American citizens don’t even get that kind of special treatment.

Let that sink in.

But that travesty is not stopping the Trump administration. Under him, ICE is kicking butt and taking names. Quite literally.

This week they stormed Northern California, rounding up the lowest of the low.

Federal immigration officials have arrested more than 150 individuals in violation of federal U.S. immigration law in Northern California this week despite the Oakland mayor warning of an impending raid.

Roughly half of those arrested by deportation officers have convictions for assault and battery, crimes against children, weapons charges and DUI, according to the agency.

ICE highlighted the arrest of one fugitive of the federal agency in particular, who officials stated is a documented gang member.

The criminal was Armando Nuñez-Salgado, 38 years old, from Mexico. He was deported four times by ICE, only to re-enter the United States every single time. The crimes he committed amount to more than 15 years of prison sentencing. Not a nice guy.

The other arrests include more gang members and other illegals with criminal convictions. The facts are clear: Trump isn’t rounding up innocent families and throwing them to the wolves (also known as Mexico), which is what Democrats want you to believe. He is cracking down on the seemingly endless gangsters that sneak into our country.

These ugly criminals mock our laws by exploiting our weak border. Then they take advantage of the sanctuary city clauses and commit as many crimes as possible before seek refuge in one such city. From there, local law enforcement has its hands tied, thanks to local government and are not allowed to help federal officers locate, detain, or assist with deportation.

What other response can we make but swift justice? For the sake of the lives of innocent American citizens, we applaud the president’s efforts in sweeping these cities, arresting these thugs, and sending them back where they belong.