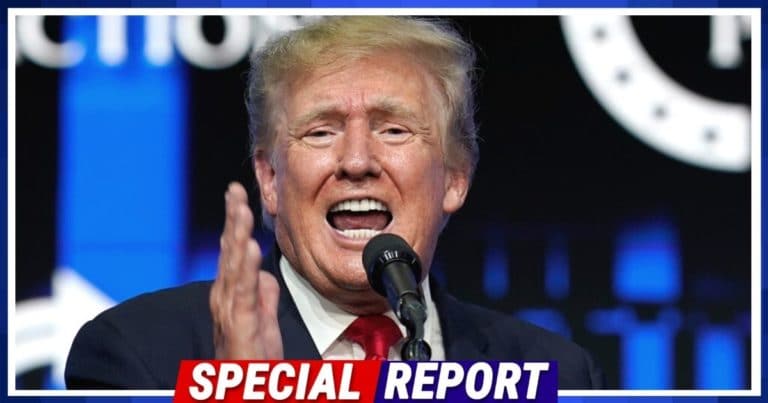 Almost immediately after the FBI raid on Donald Trump’s Mar-a-Lago estate, the former President called it “unnecessary” and “unprecedented.”

Reports claim agents removed many sets of classified documents but so far, the DOJ hasn’t made the affidavit related to the raid public.

The most recent development involves something the FBI likely shouldn’t have taken.

Rumors persist about nuclear documents the FBI seized at Trump’s home, and there are reports about the FBI going through Melania’s personal items.

But beyond that, Trump’s team is now claiming that agents took Donald’s passports during the raid.

On social media, the former POTUS wrote: “In the raid by the FBI of Mar-a-Lago, they stole my three Passports (one expired), along with everything else.”

Afterward, CBS News anchor Norah O’Donnell contradicted this, saying a DOJ official confirmed the FBI is “NOT in possession” of these passports.

It didn’t take long for a Trump spokesperson to respond (via The Daily Wire):

A spokesperson for Trump later responded directly to her tweet by posting a screenshot of an alleged email from Justice Department counterintelligence chief Jay Bratt that stated that the passports were being returned.

‘We have learned that the filter agents seized three passports belonging to President Trump, two expired and one being his active diplomatic passport.

We are returning them, and they will be ready for pickup at WFO at 2 pm today. I am traveling, but you can coordinate further with [redacted] copied above. Thanks.’

Prior to the raid, sources told the New York Times that at least one of Trump’s lawyers signed a statement saying all classified material in Trump’s possession had been returned to the government.

However, with the reported 11 sets of classified documents recovered, this could pose a problem for the former President.

But we have yet to see a full justification for the raid from the DOJ, which is what many people are waiting for.

As for the passports, legal experts are saying the agents shouldn’t have taken Trump’s passports, so maybe this is why they’re being returned.

With every passing day that the situation remains murky and unclear, the more this is likely to blow back on the Biden administration.