Trending //
Turn Off Ads On Site My Account
Feinstein Leaks Witch Hunt Details, So Donald Gives Her A Genius Nickname 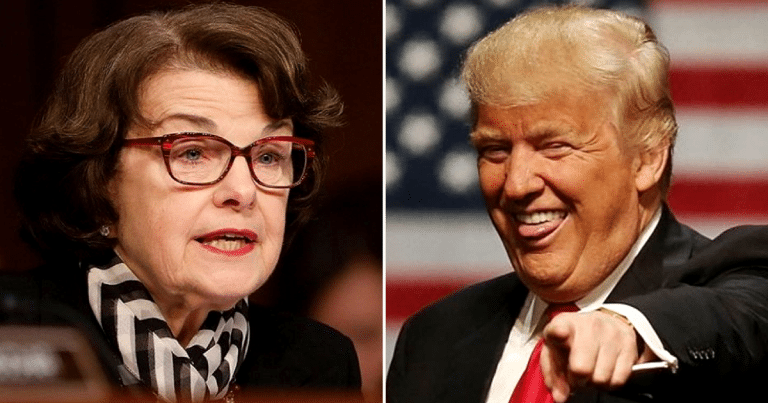 The Russian “collusion” investigation has gone on far too long. Taxpayers dollars are being wasted just so liberals can pretend the 2016 Election didn’t happen.

The FBI opened this investigation due to the debunked Steele dossier. This dossier was widely panned, even by liberal journalists, as unverifiable. Yet then Director James Comey considered it enough to persecute Trump–and everyone who voted for him.

Now another violation of justice has occurred. Dianne Feinstein released a transcript from the ongoing investigation. Not only does this undermine any legitimate investigation, but it shows how desperate the Democrats have gotten.

Trump had some words for the wayward senator.

President Trump slammed “sneaky Dianne Feinstein” Wednesday after the Democratic senator released the transcript of a congressional interview with the co-founder of the firm behind the anti-Trump dossier, claiming the move was “possibly” illegal…

The release provoked controversy on Capitol Hill, with a spokesman for committee Chairman Chuck Grassley, R-Iowa, slamming Feinstein’s move as “confounding.” Spokesman Taylor Foy said she made the decision without consulting the chairman and warned the move jeopardized other highly sought witness testimony…

Feinstein, who faces reelection this year, said she released the transcript because, “The American people deserve the opportunity to see what he said and judge for themselves.”

Sen. Feinstein released this transcript simply to generate drama. The left still believes they can find dirt on Trump. Yet after two years, there has been zero evidence that Trump worked with Russia. The “dossier” was created by Democrats in the hopes of smearing Donald Trump.

Since there is no dirt, the left is getting desperate. Feinstein released this document, hoping the media would feed on it for a while. Perhaps they could twist details into a new false narrative. Yet Feinstein did this without consulting the rest of the Senate Judiciary Committee. Sensitive information could have been leaked to the public as a result.

But I guess that doesn’t matter, eh Democrats? Any excuse to cause chaos, panic, and to smear the President.

Trump’s nickname is fitting. Liberals have no scruples left. They are only lashing out, like children, that they lost the White House. Their dreams of turning America into a Socialist dictatorship have failed. All they can do now is cause problems.

Feinstein’s up for reelection, eh? Let’s hope enough conservatives vote her out.