Trending //
Turn Off Ads On Site My Account
Trey Gowdy Grills Obama Deep-Stater: “What The Hell Is Going On?” 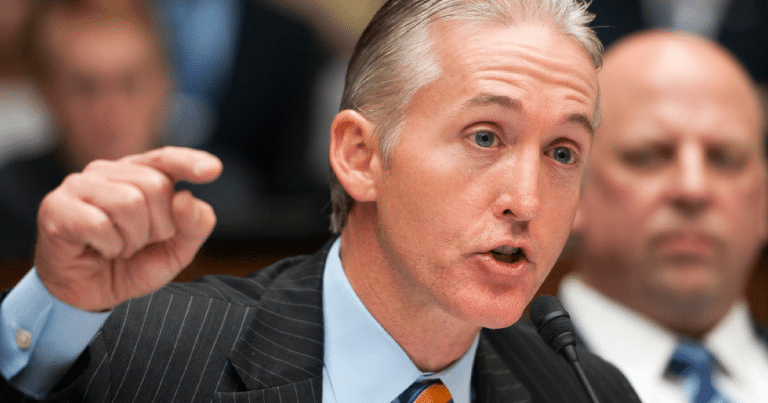 By now, we are all well aware of the Deputy Head of Counter-Intelligence in the FBI Peter Strzok is a colossally damaged, Narcissistic, vulgar and dishonest man who runs with a Deep State pack mentality that borders on psychotic. This is the agent who was having an extramarital affair with an FBI lawyer, Lisa Page (who was a content witness in the Trump Dossier case, by the way) and texting her with some of the most horribly inappropriate filth imaginable regarding candidate and President Trump and his family; 10K+ texts and counting!

Strzok, believe it or not, is a member of the Robert Mueller “dream team” of attorneys and investigators who are ostensibly supposed to be looking into Trump-Russia collusion in the 2016 election. Mueller cobbled together a team of dozens of raging Liberals who have one very large thing in common: both their seething hatred for Donald Trump and their sycophantic adoration for Hillary Clinton!

As this investigation first reared its ugly head, newly minted Attorney General Jeff Sessions immediately recused himself, opening the door for Deputy AG Rod Rosenstein to step up and appoint Mueller as Special Counsel. Nearly a year into this investigation has turned up no evidence of collusion, but more than that, it HAS turned up a nearly unanimous stream of unending examples of super-bias against the president. US Representative Trey Gowdy (R-SC) was curious as why Rosenstein sat by while all these things appeared to go unnoticed by him, at one point, shouting the question, “What the hell is going on?”

Congressman Trey Gowdy (R-SC), a former prosecutor, took the gloves off with his questioning of Deputy Attorney General Rod Rosenstein, who worked in the Obama Administration, during a House Judiciary hearing.

Gowdy demanded answers, noting that his constituents want to know “what the hell is going on” with the FBI and the Justice Department.

In those texts, Strzok called President Donald Trump an “idiot” and made fun of Trump-voting Walmart shoppers.

These texts show an extraordinary amount of bias for someone who is supposed to not be partisan.

Strzok and his mistress called the Trump family “douchebags” and they conspired to find creative ways to help Hillary Clinton’s campaign. Mueller fired Strzok last year, but we didn’t learn about the reasons until this month.

Mueller’s team has spent millions to investigate President Trump, but has yet to prove a connection to Russia. Now we’re learning just how political the investigation is, with Democrat donors and loyalists running the operation.

Clearly, Mueller’s investigation has no credibility and these partisan hacks shouldn’t be allowed to waste taxpayer money on an investigation that produces no results.

I have been watching hours of hearings and the team of Republican pit bulls who are tearing into Rosenstein, as well as Acting Director of the FBI Christopher Wray, is impressive. Right on down the line, the House Judiciary Committee Republicans, from Gowdy, Chairman Bob Goodlatte, Jim Jordan, Darryl Issa, Louie Gohmert, Steve King, and Matt Gaetz, there were fireworks and I would NOT want to be on the receiving end of these guys and their questions.

As for the conduct and professionalism of this Mueller “dream team,” it is quite obvious that an impartial, unbiased investigation by this group will be filled with so many ethical lapses as to appear on the verge of a tragic comedy. This needs to end now and Rosenstein has to appoint a new Inspector General who will have the power to not only investigate these political hacks, but begin with the process of reestablishing a purely nonpartisan look into the many crimes of Hillary Rodham-Clinton!