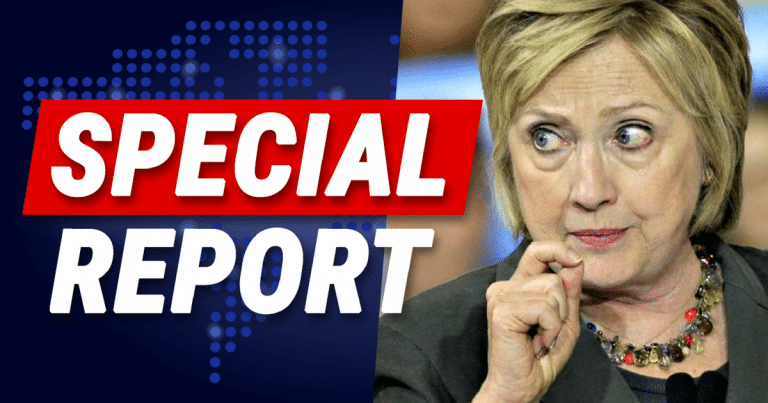 Ever since James Comey all but exonerated Hillary Clinton, patriots were outraged. In the same breath, the former FBI head admitted she broke the law, but didn’t deserve to be prosecuted.

Cleary, the fix was in. Obama’s lackeys were “circling the wagons” to protect the party. They didn’t want a legitimate investigation hurting her chances at winning the presidency. So, they derailed the case and gave her a pass.

It was one of the many things that opened America’s eyes. Obama, Clinton, and the DNC were running a criminal organization. They ignored our laws and democracy to stay in power. All across the country patriots were disgusted by their conspiracy. They rallied behind Donald Trump, who promised to end this kind of corruption.

But we still have to wonder about Hillary Clinton’s email investigation. News has come out over the last few years that top FBI officials running the case were biased. They were supporters of Hillary Clinton, a clear conflict of interest.

Many have speculated that wrongdoing was going on at the Bureau. Now it looks like a lot more evidence is about to come out.

A new report suggests an imminent Inspector General (IG) report may rule that FBI and Justice Department officials broke the law in their handling of the Hillary Clinton email investigation.

Investigative reporter Paul Sperry said Thursday that Justice Department Inspector General Michael Horowitz has “found ‘reasonable grounds’ for believing there has been a violation of federal criminal law in the FBI/DOJ’s handling of the Clinton investigation/s,” adding that the top watchdog official has “referred his findings of potential criminal misconduct to Huber for possible criminal prosecution.”

BREAKING: IG Horowitz has found "reasonable grounds" for believing there has been a violation of federal criminal law in the FBI/DOJ's handling of the Clinton investigation/s and has referred his findings of potential criminal misconduct to Huber for possible criminal prosecution

In response to growing calls for a second special counsel to probe the Clinton email probe, along with FISA abuses that took place during the 2016 election, Attorney General Jeff Sessions announced in March the appointment of Utah’s top federal prosecutor, John Huber, to probe potential wrongdoing.

Let’s look over what we know. Hillary Clinton, while Secretary of State, used a private email server to conduct government business. This is illegal. All official documents must be transmitted over a secure, government network. Clinton sent classified documents across her unsecured server—another violation of law.

It has led many to wonder, what was Clinton up to? Why violate federal law to keep your messages off government servers? Many have speculated it had something to do with her pay-for-play scheme she was conducting among foreign states and big Clinton Foundation donors. They would give her organization big money and they suddenly got favors from the State Department.

An FBI investigation would have uncovered that. But before the facts were in, James Comey shut it down. Pretty odd, huh? Almost like the FBI gave someone guilty of crimes a pass. Because she was running for President.

We know that the FBI would not have done that, if it was Donald Trump. He’s done nothing wrong and they still investigate him over Russia. Imagine if he had been using an illegal email server? Yet because it was a former Obama official, they gave Hillary a pass. That’s got to be criminal.

This new revelation might possibly lead to a real investigation. Those FBI agents who broke the law must be held accountable. If they derailed the investigation out of political motives, they will be brought to bear.

And what about Clinton? It’s very likely Trump will open another investigation. The FBI must do their job and uncover the truth.

Boy, you know the democrats are freaking out over this. If we out their top candidate as a criminal, then the rest of them won’t look as good. Americans will see how close we were to electing a criminal.

Things are about to get very interesting.