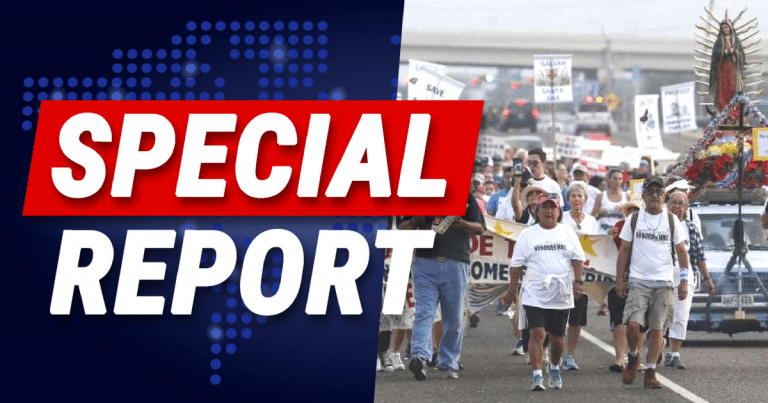 Every day, while Americans are being extorted and murdered by illegal immigrants, liberals are fighting to keep them in the country. While Americans struggle to support themselves and their families, liberals fight for people who have violated our country’s laws to receive billions in welfare.

The irony is unbearable. The people who chant that America was never great are the ones fighting to not be deported. The people who take a knee for the flag want to lecture the rest of us about how we are a nation of immigrants and that “love has no borders.’

Love may have no borders, but sovereign nations do. Israel has a wall to protect them from Hamas terrorists. Even Mexico has part of its border with Guatemala protected by a fence.

President Trump recognizes these facts and is working tirelessly to protect Americans from being murdered by illegals by building a big, beautiful wall.

Those who are against the wall have been embraced by the mainstream media, while supporters of it have been ignored. But even in the most liberal of places, the voices of true Americans are being heard.

Supporters of President Trump and the families of victims of illegal immigrant crime held a pro-border wall rally in San Diego, California on Tuesday as the president toured prototypes of the wall.

Trump supporters drowned out small gatherings of open borders activists and illegal aliens who were protesting Trump’s visit to San Diego, chanting “Build that wall!” and telling stories of what illegal immigration has specifically done to the sanctuary state of California:

The crowd was racially diverse, and included victims of illegal alien violence. Many tearfully shared their testimonies of losing husbands, wives, and children to people who should never have been in our country in the first place.

While this occurred, Trump toured prototypes of the wall, proclaiming that, “If you don’t have a wall system, you’re not going to have a country.”

Liberals who are all of a sudden are concerned with fiscal responsibility have said the wall is too expensive, with an estimated price tag of $18 billion.

But considering the US shells out $45.8 billion per year on welfare for illegals, the wall is sure to pay for itself in no time.

Time for the DREAMers to go home and make Mexico average again.