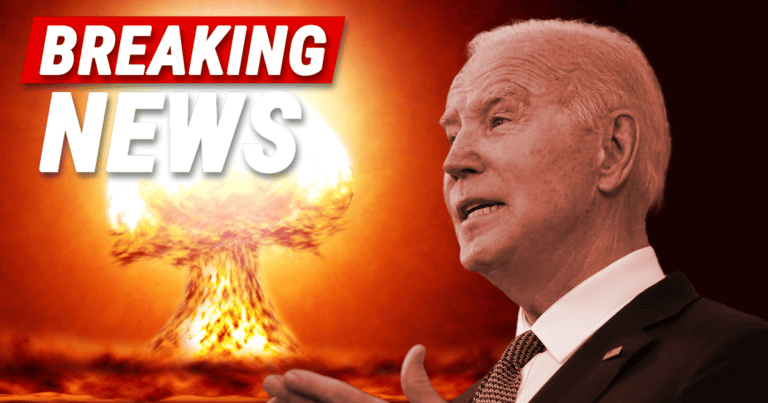 How effective of a world leader has Joe Biden been? Well, you can tell me. He failed to protect Afghanistan, giving it back to the Taliban.

His negotiations with Iran fell through, meaning this rogue nation is more dangerous than ever. And he is sitting back as China gets closer to annexing Taiwan. But that’s all just for starters.

Even Joe is admitting he’s failed to stop Russia from attacking Ukraine and threatening the world. In fact, while speaking at a fundraiser, he revealed he cannot stop the very worst from happening.

“[Putin was] not joking when he talks about the use of tactical nuclear weapons or biological or chemical weapons,” Biden said. “We have not faced the prospect of Armageddon since Kennedy and the Cuban Missile Crisis.”

I’m sure Joe (or whoever wrote this speech for him) thought this comment was going to motivate these rich liberals to open their wallets.

But all he managed to do was admit he has failed so terribly as president, that we could be seeing “Armageddon,” meaning the end of the world.

Biden referenced the Cuban Missile Crisis from the 1960s–when the communist nation was getting missiles from Soviet Russia.

But disaster was averted because we had a level-headed leader in the White House.

Today? We have an old man with cognitive decline who acts like the DNC’s rubber stamp.

For Biden to even be joking about Armageddon (if it was a joke) is a total failure on the part of this administration.

In reality, Joe probably said it with a smile. Why? Because he, like most D.C. swamp dwellers, works for the military-industrial complex.

The rich lobbyists who run Washington want nothing more than another endless war. Biden was actually getting this group of donors happy because war means big business for them.

But for the rest of us? It could very well be the end of the world.

At least we no longer have mean tweets, right?