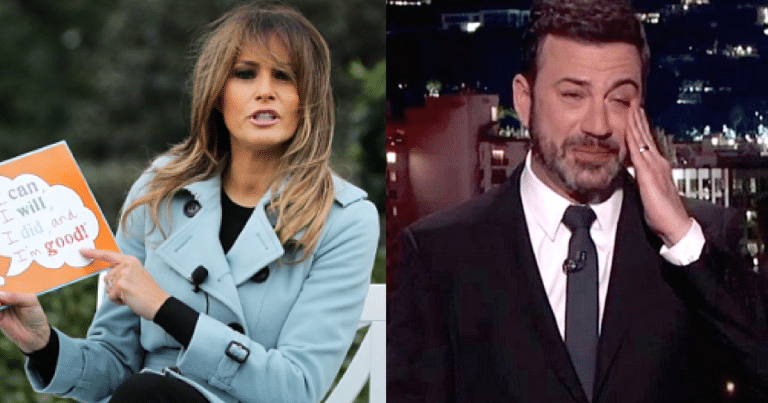 Liberals take a great amount of pride in claiming to be morally superior to conservatives. They’ve been conditioned by the liberal media to believe that anyone who doesn’t think like them is evil, and must be opposed by any means necessary.

This opposition can range from belittling and insulting conservatives, to violently attacking them. When it comes to “bigots” and “racists”, nothing is off limits.

Their delusions about the right are so profound that constructive dialogue has become impossible, and they’ve become blind to the fact that their behavior has made them the true bigots and racists.

Nowhere is this more evident than with the left’s attacks against the First Lady. If Melania Trump were a liberal, she would be adored by the media. She is every demographic that the left claim to be fighting for. She is a woman, and an immigrant, but because of who her husband is, she’s nothing more than target practice for the “tolerant” left.

But Americans have had enough of one liberal “comedian’s” bullying antics, and are taking serious action against him and his show.

An online petition launched recently, calling for a boycott of “Jimmy Kimmel Live,” and has exceeded its goal of 50,000 signatures. Organizers say the petition will eventually be sent to “the front door of Disney/ABC Studios” Burbank, Calif.

“We may not get him kicked off the air,” the petition says. “But we can send a message that these attacks on our First Lady will NOT be tolerated!”

A petition calling for a boycott of ABC’s late-night host Jimmy Kimmel has surpassed 150,000 signatures after he dedicated a segment of his show to mocking First Lady Melania Trump’s Slovenian accent.

This boycott is in response to Jimmy Kimmel mocking Melania Trump’s accent on his show. The First Lady was innocently reading a book to children gathered at the White House for Easter, and Kimmel mimicked her pronunciation of “this or that” by saying, “dees or dat” in a belittling way.

Where does @JimmyKimmel get off making fun of @FLOTUS Melania Trump’s accent? Is he going to make fun of someone from Boston? TX? Or is it just the accents of immigrants he mocks? The woman speaks 5 languages for Pete’s sake! He’s out of line. https://t.co/9hUKWq9BzS

I’m not sure when Kimmel became society’s moral compass, but making fun of someone’s accent doesn’t seem like it would earn you much praise from most immigrants. Yet Kimmel continues to be the left’s poster child for how benevolent the Left is towards immigrants.

Kimmel has also inexplicably become the face of the #MeToo movement, using the Oscars as a soapbox for how Hollywood must work harder to protect women in the entertainment industry.

This is coming from a man who got famous for showing scantily clad women bouncing on trampolines back when he hosted The Man Show. How on Earth does someone like this get to lecture the rest of the nation on sexual propriety?

Hopefully, if enough people agree to finally boycott his show and say enough is enough, this hypocritical clown can get off the air.