Trending //
Turn Off Ads On Site My Account
Legal Immigrant Trump Fan Drops Mic On The ‘Undocumented’: “If I Can Do It So Can You” 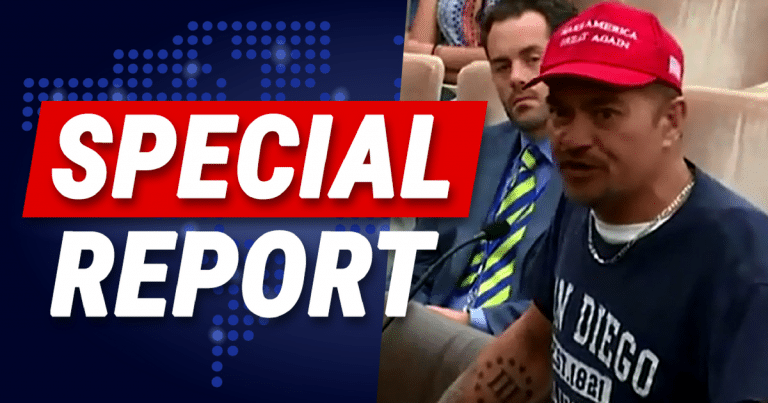 The battle over illegal immigration rages on in America. Don’t be surprised to see liberals continuing the fight. They have worked for decades to exploit illegals for votes.

Just because Trump is in the White House doesn’t mean they’ll give up their villainous plans.

But as they crow on and on about ‘innocent’ illegal families, they ignore one important fact. There are millions of legal immigrants who live in the United States.

Countless families came to America, followed the rules, and are now members of our society. Today, many immigrants go through the legal process, without a shred of fear of being deported.

Democrats never mention these people. But we will.

They are proof you don’t have to break the law to enjoy the American Dream. One of these people, now a legal citizen, described the process his family took to become Americans. He powerful message condemns every liberal who protects ‘undocumented’ immigrants.

Before the Escondido city council in California voted four to one to join the Trump administration’s lawsuit against the sanctuary state, a legal immigrant gave an impassioned speech about how he came to America.

“I speak to you as an immigrant myself,” he said Wednesday while wearing a “Make America Great Again” hat. “I came to this country 45 years ago with me and my mother. Okay. 45 years ago we were not offered sanctuary! We were not offered easier, softer way. Okay. We were told you have to be an American citizen and here’s what you have to do, and we did it. We worked hard. And we put in our time…”

“Now, I now have a piece of paper hanging on my wall called a naturalization certificate that says I am a proud United States American citizen. And if I can do it, every single person that’s a dreamer in this room can do it” he concluded. “Every person that’s undocumented in this room, they can do it, too.”

The legal immigrant (now American citizen) boldly wore a ‘Make American Great Again’ hat. Not a surprise he’s a Trump supporter. He told his story. It was just him and his mother. He was just a child, his mother probably had to work very hard to support them. On top of that, they had to follow the strict laws governing immigration.

Yet they did it, no problem.

This family destroys the left’s narrative entirely. They claim illegal immigrants are too poor, uneducated, or capable to go through all the steps to be here legally. But this immigrant mother and her son were able to do it. They were regular folks, just like all the people who sneak across the U.S.-Mexican border.

He didn’t have any specific advantage or privilege. He and his mother just worked hard and followed the rules. There was no magic involved. So why can’t the many ‘undocumented’ immigrants do the same?

The legal process takes time. There are quotas and limits put into place. Many illegals don’t want to wait or are unwilling to follow the rules. So, they sneak in. Then they are told by Democrats they can stay. It’s a travesty of our laws and order.

But this proud American proves everyone can do it the right way. I wonder how many journalists will tell his story? How many mainstream outlets will give this immigrant—this American—a chance to share his voice?

I think the number is around zero.

We will share his story. We hope you do too.