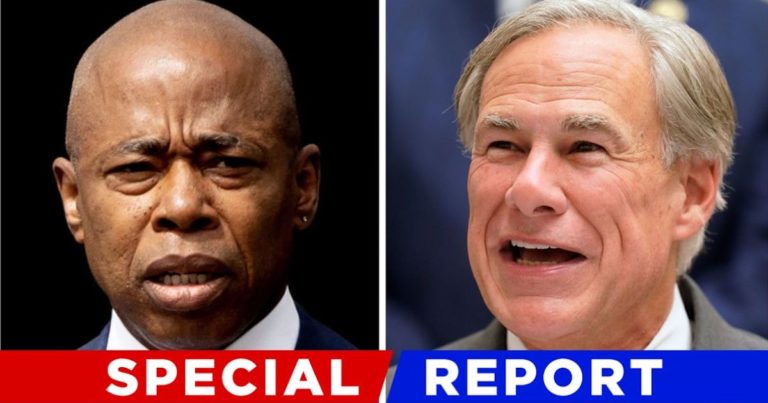 For most of Joe Biden’s presidency, Texas has been begging for help with the border crisis. Border authorities and the Department for Homeland Security (DHS) have reported record-high numbers of arrests and encounters.

It has been a sore spot for many U.S. citizens, as the flood of illegal foreign travelers has only intensified over the past few years. In response, Texas has started busing these migrants to Democrat-run cities.

One Democrat mayor claimed these migrants were being “tricked” onto buses — but Texas Gov. Greg Abbott quickly set the record straight.

New York Mayor Eric Adams has complained about Texas shipping migrants to his state, as has Washington D.C. Mayor Muriel Bowser. Both cities are now seeing an influx of undocumented migrants.

This caused Bowser to request help from the National Guard, and also prompted Gov. Abbott to send over a fiery reply to her complaints.

As for Adams, he has alleged several times that migrants are essentially being forced onto buses, or “tricked” into getting on the bus against their will. Texas didn’t waste any time in contradicting this claim, though.

Adams was quoted as saying, “They were forced on the bus with the understanding that they were going to other locations that they wanted to go.”

But Gov. Abbott’s office says this isn’t true at all. From Fox News:

Texas Gov. Greg Abbott said Wednesday that migrants bused out of state are given voluntary consent waivers and are not — as New York City Mayor Eric Adams has alleged — being forced onto the buses.

Abbott’s office told Fox News that the mayor’s allegations are false, and that all migrants sign a waiver — available in multiple languages — before they get onto a bus to D.C. or NYC.

Since the buses started arriving, NYC’s Office of Immigrant Affairs Commissioner Manuel Castro said it’s “morally corrupt” of Gov. Abbott to send these buses, and slammed it as as a “political ploy.”

That isn’t about to stop the Lone Star State, however.

In fact, there are rumors that Gov. Abbott will send more busloads of migrants to other Democrat-dominated cities. As far as he’s concerned, if they love the illegal migrants so much, it shouldn’t be a problem:

In addition to Washington, D.C., New York City is the ideal destination for these migrants, who can receive the abundance of city services and housing that Mayor Eric Adams has boasted about within the sanctuary city.

I hope he follows through on his promise of welcoming all migrants with open arms so that our overrun and overwhelmed border towns can find relief.

So far, Texas has sent over 5,000 migrants to Washington D.C., and many more may be headed to NYC.

But as Republicans accuse the Biden administration of doing little to address the border crisis, many of them applaud Abbott’s move. It’s simply putting on the Democrat doorstep what southern states have been battling for years.

If they want the flood to stop, GOP leaders say it’s simple: reinforce the border, and enforce existing immigration and citizenship law.