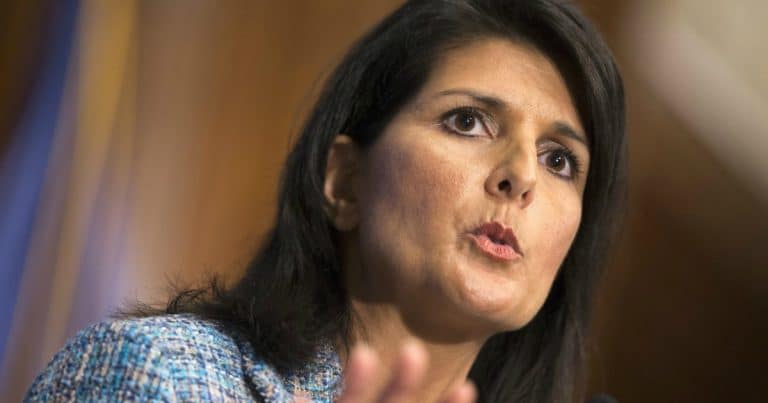 Under President Trump, the United States strongly supports Israel. You’d think that would be a given, right? America has been an ally of Israel since day one. Not in recent years.

During the Obama administration, our support of Israel was in question. While our official stance was in favor of the only Jewish state, Obama’s White House was less than supportive. It seemed like he was more interested in fitting in with Europe, which constantly voted against Israel.

The United Nations has attacked Israel frequently. They’ve voted to condemn the nation for protecting itself. Think about that. The only Jewish state in the world. The only democracy in the Middle East. And it’s being persecuted and bullied by the world.

In an amazing show of resolve and friendship with Israel today, UN Ambassador Nikki Haley walked out when the Permanent Observer of Palestine to the United Nations, Riyad Mansour, started speaking to the UN…

Now this was after Haley gave a great speech in defense of Israel over the attacks from the Palestinians in Gaza yesterday.

That’s pretty gutsy. But nobody’s ever accused Haley of being a weakling. She’s stood up to the U.N., time and again, after it’s broke trust. It’s an organization that is supposed to foster peace and democracy around the world. But more often than not, it supports dictators, tyrants, and hostile regimes.

Why else would they give the floor to Palestine? This is a group that hates Israel. They regularly promise to destroy the nation. They support terrorists who kill Israeli children and families. Why should the U.N. give that kind of leader the floor?

Nikki Haley’s walkout is a clear sign that America is done play games with Palestinians. They have become too hostile and dangerous. They don’t want peace with Israel, only war.

The down side for them? They’re going to have to deal with the United States.