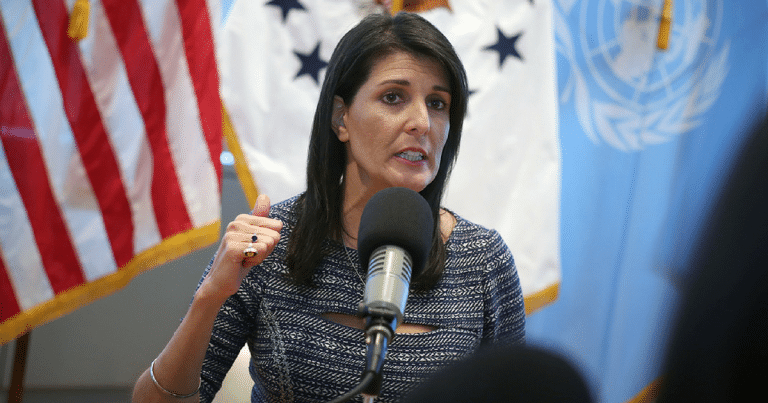 U.N. Ambassador Nikki Haley is awesome. There’s just no way around it. She has set the U.N. on their ears for their Israel and U.S. bashing Sessions, stood up to them for their support of Iran, and called them out over their hypocrisy on human rights issues.

So after the news broke that Russia was behind the poisoning of a former spy in the U.K., she had no problem pointing out to the U.N. that if they didn’t do something and quick, it would only be the first of Putin’s use of chemical weapons in the West.

She also warned them of the next likely target for Putin’s use of chemical weapons.

From the Washington Examiner:

New York City could be the next site of a chemical assassination attempt if world leaders fail to punish Russia for its alleged role in the poisoning of a former spy in the United Kingdom, U.S. Ambassador to the United Nations Nikki Haley warned Wednesday.

“If we don’t take immediate concrete measures to address this now, Salisbury will not be the last place we see chemical weapons used,” Haley told the United Nations Security Council. “They could be used here in New York, or in cities of any country that sits on this Council. This is a defining moment.”

Of course, Haley is right. If the U.N. doesn’t punish Russia in some way, then they will be unafraid to continue their attacks on others across the world. And, the U.S. could easily be their next target.

The U.N. has stated previously that they are completely against the use of chemical weapons for any reason. So now that one of their own members has used chemical weapons, the world is going to see if they stand by their words.

Let’s just pray that they take her advice and do something sooner rather than later, or Putin’s next attack could hit a lot closer to home.