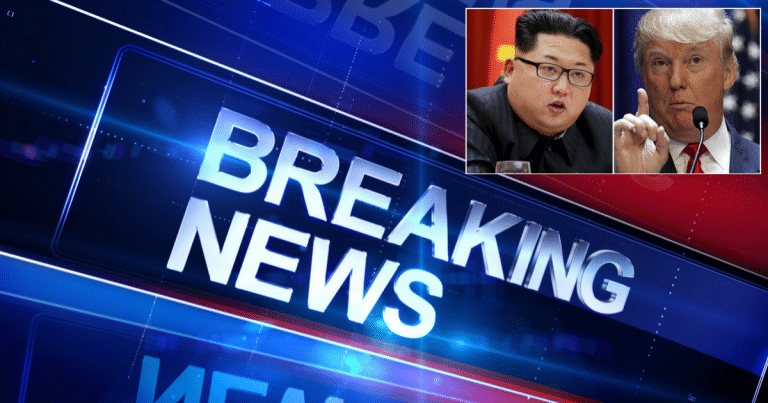 Things were shaping up very nicely for peace with North Korea. Were.

Thanks to efforts by the Trump administration, it looked like North and South Korea would be burying the hatchet.

The leaders of both nations met for the first time in years. They gathered with Chinese leaders to discuss the future. Even our Secretary of State met with Kim Jong-Un to discuss coming to an agreement between both our nations.

To top it all off, President Trump was going to meet with Kim Jong-Un. This historic gathering would mark a major achievement between the U.S. and North Korea. Perhaps we could make peace with our long enemy. And bring peace to that region.

But in recent days, things seemed to change. Words coming out of North Korea have once again become hostile and aggressive. North Korea called Mike Pence a “political dummy.”

It looks like not everyone in the communist regime wants real change.

It has all come to a head, forcing President Trump to make this breaking announcement.

The meeting, which would have marked the first face-to-face encounter between a sitting U.S. president and a North Korean leader, was set for June 12 in the southeastern Asian island city state.

“Sadly, based on the tremendous anger and open hostility displayed in your most recent statement, I feel it is inappropriate, at this time, to have this long-planned meeting,” Trump wrote in a letter to Kim, which was released Thursday morning.

The news came as North Korea made a show of dismantling a nuclear test site, but also on the heels of some sharp words from the North Korean government about American demands regarding denuclearization.

His full letter to North Korea is something to behold:

North Korea is hardly in a good place. They need to come to terms with the U.S., South Korea, and our allies. Their nation is dying. Its people struggle and need help.

However, the leaders still want to pursue aggressive tactics. They still feel the need to insult our Vice President in the midst of peace talks and bully the rest of the world.

It’s not a surprise that Trump called off the summit. Kim and his cronies need to learn that they have to play fair. If they want to be taken seriously, that is. They must cooperate with the U.S. and our allies. That is non-negotiable.

President Trump’s move to pull out of the meeting will hopefully wake up the North Korean leadership and get them to grow up and act like respectful citizens to the greatest power in the world.

Of course, this is not some Trumper-tantrum, it is an extremely smart move by the world’s greatest deal-maker.  Now that North Korea has thrown their sarcastic tantrum, watch them come slinking back with their tail between their legs, begging for all the great benefits Donald has promised them if they play fair.

They will have to come to the table fairly and be willing to work with America. If not, things won’t go well with them.

This is a developing story. Be sure that more will come out soon.