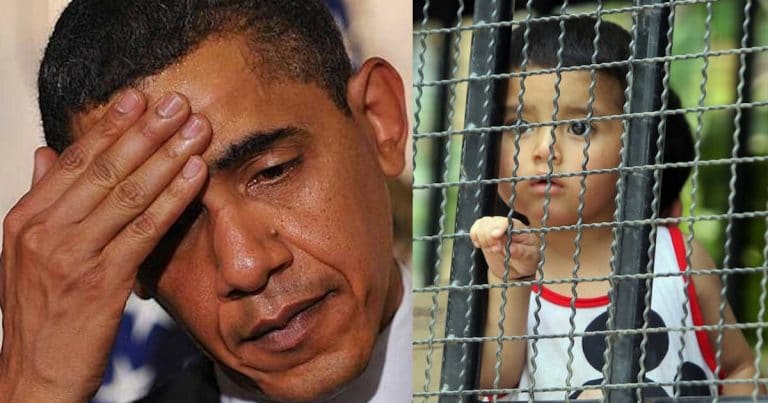 We’ve seen a lot of fake outrage on the left over Trump’s detainment policies.

All of a sudden, liberals are fuming over the fact that the government separates parents from children while detaining them.

Democrats claim this is cruel and wrong, but they never think about the irresponsible parents who endangered their children by entering America illegally.

Over the last week and a half, the fake news has tried to distort the facts, as they do with every issue. They have tried to paint President Trump as some kind of monster who is “ripping” kids from parents’ arms.

And yet, they conveniently ignore the fact that these policies have been around for a long time. In fact, the Trump administration is trying to improve the situation.

The same certainly can’t be said for the previous POTUS, either.

Wallace explained that he jailed entire families and, in some cases, separated children from their families.

Pictures were also shown on the screen of unaccompanied minors in jail situations while Wallace was speaking.

“I freely admit it was controversial. We believed it was necessary at the time, I still believe it is necessary to remain a certain capability for families.

We can’t have catch and release. In my three years, we deported or returned over a million people, but again, you can deal with this on the border, you can try different things, we did not want to go so far as to separate families…

…but unless we deal with the underlying causes that are motivating the people to come here in the first place, we are going to continue to bang our heads against the wall on this issue.”

"I freely admit it was controversial, we believed it was necessary at the time, I still believe it is necessary to remain a certain capability for families.” pic.twitter.com/1fyN8jXmwY

Funny how liberals are allowed to admit these things … but when Trump says the exact same thing, he is branded a racist, xenophobe, and bigot.

Obama knew there was a crisis at the border, but even then, Democrats and corrupt Republicans wanted more illegals in America to exploit.

The mess he created was passed on to Trump, who is actually making good progress. It’s amazing to hear Johnson admit we have to confront the real problems at the border.

As he said, “the underlying causes”… Perhaps people are motivated to come here, because we have a massive, open border? Maybe if we secured it, they’d realize they can’t just waltz across the border any time they wanted?

Call me crazy, but perhaps a border wall would force Mexico to actually care about its people?

And for our part, unless we get rid of the obstructionist Democrats, this problem will only get worse. Mid-terms are coming up; if Democrats win more seats, you can kiss the wall goodbye. More illegals will flood the border.

But if Republicans score more seats in Congress, Trump’s MAGA agenda will have fewer roadblocks. We can only hope…