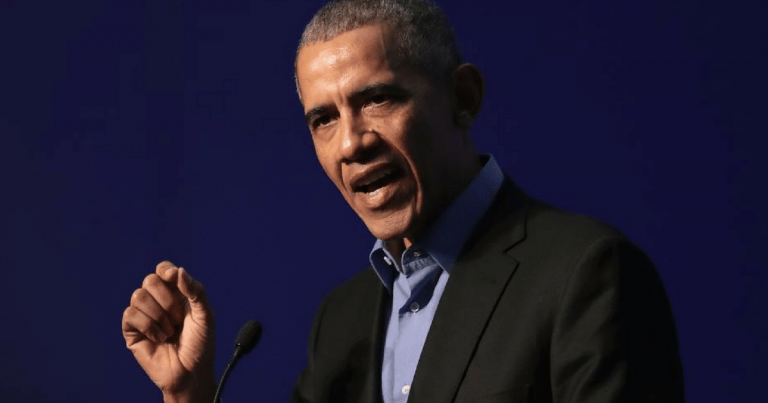 I recall the first five to six years of the Obama regime and how day after day, week after week, and year after year, the Fake News Industrial Complex reported that Barack Hussein Obama was “doing his best” to correct all the terrible economic news of the Bush years. I remember how after four years, Obama lamented not having fixed the economy yet, after promising not to seek a second term if the country was still in poor shape, and then ran for reelection. Why? Because “there was still a lot of work to be done!”

The FNIC propped up his administration’s failings for the entire eight long years of this excruciatingly annoying process of America in a slow death spiral. We heard about Bush’s terrible economy almost as much as we’re hearing about Trump’s approval ratings hitting an “all-time low.” Oh, yeah, FNIC…don’t think we didn’t notice that you’re putting up that headline weekly.

In a speech on global warming to a sycophantic crowd last week, Obama (in attempting to validate his massively unproductive near-decade-long stint as president) actually took the opportunity to lie to the crowd that he was directly responsible for Trump’s booming economy and job growth!

Well, this just figures. Obama had the stones to literally thank himself in a speech last week as he took credit for the economic growth that President Trump has ignited. At a Chicago climate summit, he spoke to a rapturous crowd and told them that despite “resistance at every step of the way,” his administration’s efforts to fight climate change resulted in a better economy. Uh, excuse me? Climate change has had NOTHING to do with this economy. If anything, it has cost us millions that we could ill afford. Obama is a delusional Marxist.

“As we took these actions, we saw the U.S. economy grow consistently,” Obama said. “We saw the longest streak of job creation in American history by far — a streak that still continues, by the way.” He then had the nerve to add: “Thanks Obama.” Excuse me while I vomit… A LOT. What a freaking liar. I know a lot of people who were unemployed the whole time Obama was in office. He had us in a quasi-depression. There were no jobs for eight long years. Under President Trump that has finally started turning around. He’s brought manufacturing back and has reinstated energy production. The US is benefiting hugely from being more self-sufficient.

At the Chicago speech, Obama stated that forward-thinking environmental policies lead to economic growth. He said the U.S. is in an “unusual” position as the only country that hasn’t signed on to the Paris Agreement after Syria signed last month. “The good news is that the Paris Agreement was never going to solve the climate crisis on its own. It was going to be up to all of us,” Obama informed the gathering of mayors from around the world who were there to sign the Chicago Climate Charter. The agreement, modeled on the Paris Agreement, commits individual cities to bringing down their carbon emissions.

Since Trump has been in office, the stock market has skyrocketed 30 percent. We are on course for a third quarter with over 3 percent growth. The jobless rate has dropped to a 17-year low of 4.1 percent. Why? Because Trump has nixed a ton of regulations and he’s about to slash taxes. Neither of which Obama would ever do. Business leaders and economists both give all the credit for this to President Trump. U.S. Rep. Peter Roskam (R-IL) said earlier this year that Obama’s administration was the first to never have a “whole year of 3 percent growth.” Small wonder… Marxism will do that to an economy.

The highest GDP growth Obama ever reached was 2.6 in 2015. In 2016, the highest he could get was 0.8 percent. Overall, Obama’s entire presidency resulted in a 1.5 percent GDP growth. Trump has just started his presidency and he’s already reached three percent. Obama didn’t build that… not even close. Job creation under both Democrat President Bill Clinton and Republican Ronald Reagan was by far larger than the gains made under Obama. What is truly amazing about all of this is that the same man who years ago assured us that he and all the king’s men were completely dumbfounded as to how to fix the economy, that it was “so much worse than anyone was aware,” is now attempting to convince us that he planned the American economy out in such detail that at PRECISELY the 9-year mark after his anointing, the economy would suddenly blossom forth into this rose of magnificence, unseen since the Reagan years?

Do you believe that? If you can accept that Obama and his advisors were so eminently wise that they could orchestrate such an amazing comeback that would occur EXACTLY in the ninth year, the question then becomes, “Why didn’t he just formulate this amazing feat in his first year?” Oh, right. Because only Donald Trump can do that, apparently.