Trending //
Turn Off Ads On Site My Account
Reagan vs. Trump: Who Had A More Conservative 1st Year? 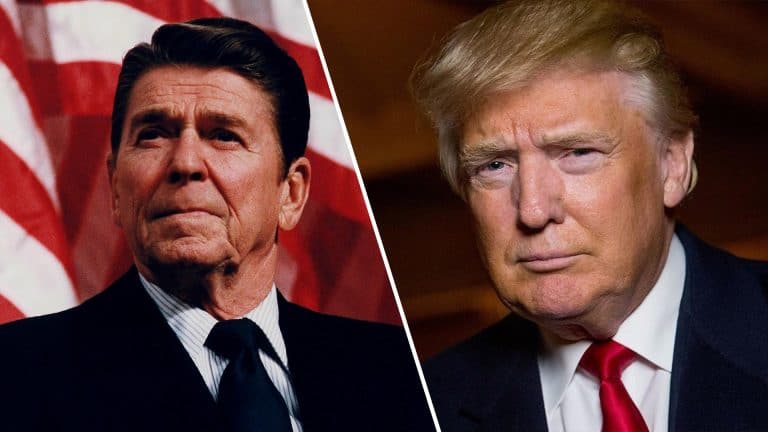 There is no President more revered by conservatives than Ronald Reagan.

The strong, uncompromising Republican brought our country back from the brink. After a disastrous 1970’s, Reagan’s policies helped kickstart our ailing economy. He was a champion of Constitutional freedoms, especially the First Amendment.

And let’s not forget he saw to the end of the Cold War and the fall of the Berlin Wall.

President Trump is a noted Reagan admirer. He has often referred to the man in his own intentions as President. But which one is “more conservative?” Which President had a better first year?

From The Gateway Pundit:

According to the Heritage Foundation President Trump did an amazing job in his first year in office – even better than conservative and American icon President Ronald Reagan!

The Trump administration has pursued policies that have hewed remarkably close to the recommendations of a leading conservative think tank, the Heritage Foundation, which found in a new review that nearly two-thirds of its ideas had been carried out or embraced by the White House over the past year…

The results, Heritage found in its review, exceeded even the first year of Ronald Reagan’s presidency, whose tenure has long been the conservative gold standard.”

By their very strict standards, the Heritage Foundation found that Trump hit more goals than Ronald Reagan. In fact, he addressed 64 percent of their list. Meanwhile, Reagan only hit 49 percent. That’s a pretty significant difference.

These results fly in the face of every NeverTrump conservative. Those hacks who claimed Trump wasn’t who he said he was. That he was a “secret democrat” who would betray the party. This is proof that they were not only wrong, but most likely lying through their teeth.

President Trump is proving to be every bit the man he claimed to be. He is draining the D.C. swamp. He is restoring our economic strength. And he is making good on his promises.

Of course, this report doesn’t impress liberals. These unhinged hypocrites can’t stand that Trump is so successful. They have never seen a politician who actually wants to help the American public. After all, none of them have ever tried!