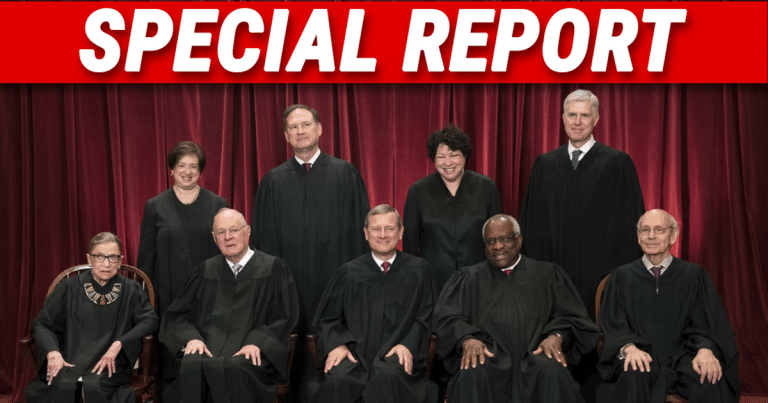 In recent years we’ve seen the Left weaponize the court system to violate Americans’ rights. But it looks like that trend is changing.

Democrats know they can’t convince everyone to goosestep along to their toxic views. Their ideas are so terrible, most people reject them immediately. The only time they can convince people to accept their Stalinist ways is by lying, lying, and lying some more.

Those of us who believe in American values, they try to beat into submission. For years, they’ve marched, preached, and lectured us to agree with them. When millions of Americans still reject their toxic garbage, they use the courts to abuse our rights.

Yet these days, things are turning around. At least at the highest court in the land. The Supreme Court just reject yet another attack on our religious rights. Their decision will undo one of the left’s biggest strategies.

The Supreme Court has refused to hear a case where a florist in Washington State turned down a gay customer when they asked for flowers for their wedding:

In Masterpiece Cakeshop, justices held decisionmakers in case of baker who declined to create cake for same-sex wedding had exhibited anti-religious bias https://t.co/rbSOgtEkId

The good news in all of this is that in the process of sending this back to the lower courts, SCOTUS vacated the lower court ruling against the florist, telling the courts to review the case in light of the Masterpiece Cakeshop case they just ruled:

Why should homosexuals enjoy so much privilege in our society that they can trample on everyone else’s First Amendment rights? If a flower shop denies service out of religious concerns, they have every right to do so. Where in the Constitution does it say gay people can overrule our right to religious freedom?

But thanks to the left, groups like homosexuals are viewed as “victims.” Because they faced discrimination in the past, they try to get special treatment today. A Christian flower shop owner is branded as a bigot, simply because they don’t agree with gay marriage.

That’s ludicrous. There are more than a few flower shops that would happily service a gay wedding. This lawsuit—like many others we’ve seen recently—is a deliberate attempt to limit our religious rights. While giving gay couples greater privilege in our society.

By rejecting it, the Supreme Court refuses to undermine our First Amendment rights. They are forcing the lower courts to redo their terrible decision. It will set a precedent to the rest of the court system that our religious rights are not to be tampered with.

That’s a win for us all.