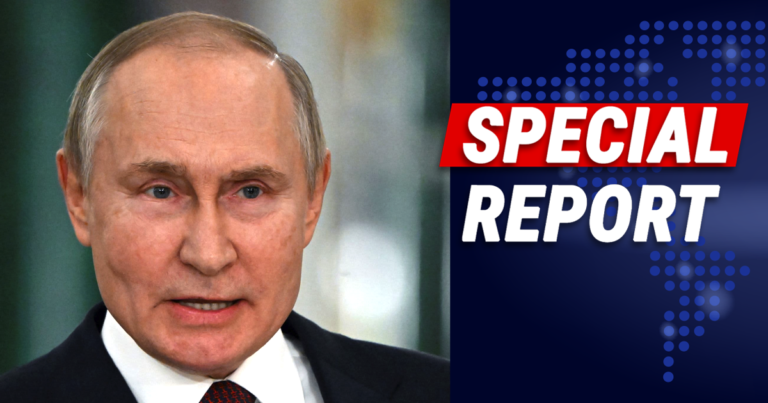 Almost a year ago, Russian President Vladimir Putin shocked the world when he invaded Ukraine. The man launched an unprovoked attack on the neighboring country, claiming it belonged to Russia.

Many believed Joe Biden green-lit Putin’s invasion when, in February, he said the US would not stop him. Since then, Biden has been burning through America’s pocketbook to bankroll this seemingly endless conflict. But it looks like Americans’ future wealth might no longer be plundered.

But it has nothing to do with Biden.

President Vladimir Putin said Russia was open to negotiations over the war in Ukraine and blamed Kyiv and its Western backers for a lack of talks, a stance Washington has previously dismissed as posturing amid persistent Russian attacks.

“We are ready to negotiate with everyone involved about acceptable solutions, but that is up to them – we are not the ones refusing to negotiate, they are,” Putin told Rossiya 1 state television in an interview broadcast on Sunday.

According to a new report, Putin is open to negotiating with Ukraine–perhaps to bring an end to the war. Russia suddenly deciding to end the war after almost of year of combat is a dramatic about-face. Putin seemed determined to use every resource available to crush Ukraine.

He even threatened to use nuclear weapons in his efforts to take over the country. But now, he wants to negotiate? Why? If you think it has anything to do with Joe Biden, think again. It seems Biden’s constant funding of Ukraine’s war effort has only dragged out this conflict. The real reasons Putin is considering a treaty seem unrelated.

VLADIMIR Putin’s cruel regime is facing total collapse in the next year as his own inner circle turn on him, experts have claimed.

As the Russian death toll in Ukraine has surpassed the grim tally of 100,000, insiders have set out how Vlad’s regime could crumble in 2023.

That’s right. Reports suggest that Putin is facing political pressure. He might want to end this war quickly to save his regime. But there might be another pressing reason he needs to get out of this war, if some rumors are to be believed.

CANCER stricken Vladimir Putin only is being kept alive by foreign doctors but time is running out for him, a Russian political analyst has claimed.

Rumors have persisted the 70-year-old tyrant is “critically ill” and according to Valery Solovey he is being kept alive with “advanced treatments”.

Could it be that Putin is dying and wants to end the war quickly because of that? We’re not sure. There is a chance a variety of reasons are motivating Putin to end this disastrous war with Ukraine. But none of them include Joe Biden.