Trending //
Turn Off Ads On Site My Account
After Trump Gives Speech At Naval Graduation, He Gives Each Grad A Personal Parting Gift 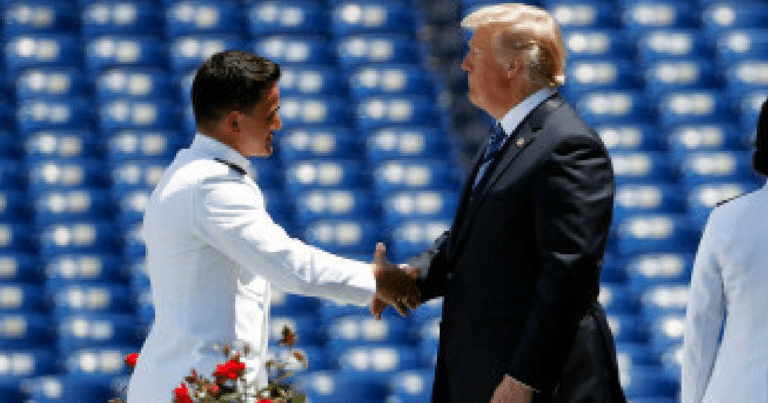 It hit me earlier today when I saw this video…Trump was cut out for this job.

It’s a very demanding position that takes a large physical toll – and we all saw what happened with less capable candidates on the campaign. Hint: it involves being chucked into the side of a van by her Secret Service handlers.

On the other hand, we have President Trump.

People question his loyalty to America, his physical capabilities, and virtually every other ridiculous thing you can imagine.

On top of that, he did something really pretty amazing.

(Let’s keep in mind here, Trump is about to turn 72 years old in a few weeks. Hillary is only 70)

He stood out in near 90 degree Maryland weather in the sun, gave an hour long speech, and then proceeded to shake the hand of every single graduate.

To spare you the 3 hour video, I found a 40 second version that is a cut showing him shaking every graduates hand. Just to give you an idea of how long he was standing there!

Check it out — no supports, no Secret Service or “handlers” holding him up or helping him up stairs.

He stands there no problem for an hour and a half straight. I’m not sure I could even do that!

Its actually pretty remarkable for a near 72 year old man under the stress that he is under trying to hold the world together. Throw in all the other crap he has to deal with from the Left, and it’s amazing that he’s able to even smile anymore.

But he does. Every day he keeps pushing forward to make America a better place for us.

Thank you so much President Trump for all that you do!