Trending //
Turn Off Ads On Site My Account
After Trump Turns Up The Heat On California, Jerry Brown Caves To His Demand 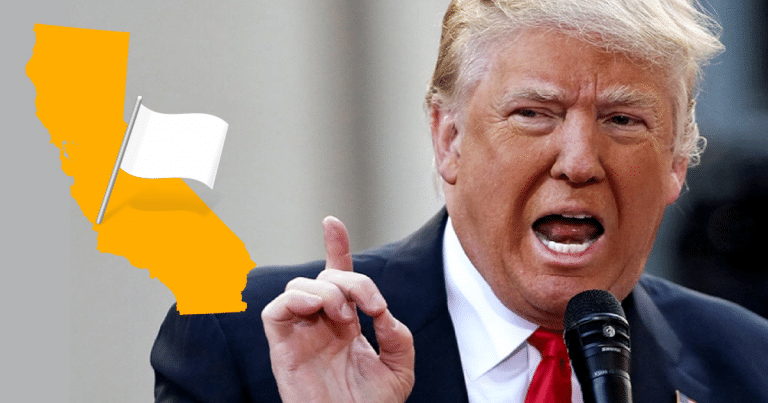 President Trump will accomplish his goals for America, come hell or high water.

His opponents clearly underestimate him, as they do the American people. They might complain or posture, but Trump’s going to make America great again.

We’ve seen it many times already. Even with less than two years into his first term, Trump has won again and again. We are seeing things happen few people could have predicted.

And what about his rivals’ attacks? They fail time and again. From Clinton to Obama to Comey to Stormy, the con artists that try to defeat Trump all fall by the wayside.

Take another Trump opponent. Governor of California, Jerry Brown, has been very vocal about Trump’s presidency. He has promised to oppose the POTUS every chance he gets. Even if that means putting Americans at risk.

But now it seems Brown has no other choice but to concede to Trump’s demands. In fact, he’s going to help secure the border. Imagine that.

Jerry Brown, the horrid governor of beautiful California, said that he will kneel before President Trump and utter passively, “what can Brown do for you?” after fruitlessly trying to resist MAGA.

California Governor Jerry Brown has announced that 400 California National Guard troops will be mobilized to fight gangs, human traffickers and illegal firearm and drug smugglers in the state, on the coast and at the border.

Why it matters: The troops will not enforce immigration laws or help build new border barriers. California and the Trump administration have been at a standoff recently, with California demanding that DHS and DOD sign the governor’s agreement memo limiting what the National Guard can be used for before deploying troops. Neither agency has signed the memo with the governor adding that he believes it is no longer necessary.

Looks like Jerry Brown and California are not looking for safety and security along their very porous Border. He cannot come to terms for the National Guard to patrol and protect the Border. The high crime rate will only get higher. Much wanted Wall in San Diego already started!

There is a Revolution going on in California. Soooo many Sanctuary areas want OUT of this ridiculous, crime infested & breeding concept. Jerry Brown is trying to back out of the National Guard at the Border, but the people of the State are not happy. Want Security & Safety NOW!

You have to realize, if Brown was actually able to oppose Trump, he’d deny sending any troops. Yet he is sending 400 National Guard to fight the criminal cartels that flood the CA border. The liberal media claims the California troops will not enforce immigration law or help build the border wall. But the memo that forbade them from doing so was never signed.

Meaning, the National Guard will do whatever they’re ordered to do. That includes preventing illegals from entering the United States or offering a helping hand to build the wall.

Why do we even need the National Guard? Because, like it or not, Trump is starting the wall. The omnibus bill secured a huge amount of cash to the Pentagon. Much of it will be used to secure the border. But how will we be able to build the wall, if drug cartels and other scum attack our workers? Enter the National Guard.

I don’t think those coyotes will have much of a chance against trained, armed American soldiers. The presence of the National Guard will ensure that efforts to secure the border will go unhindered. A brilliant move by the President.

Brown’s troops don’t have to enforce immigration law in order to do what Trump wants. They will be there to prevent violence against our border agents and construction workers. So, Trump got what he wanted from Brown. Once again.