Trending //
Turn Off Ads On Site My Account
Trump To Carry Out Monumental Military Review, Swamp Slugs At Pentagon Scrambling 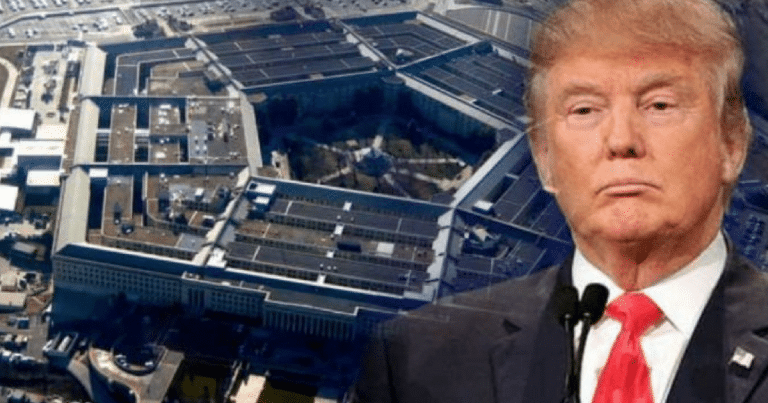 Donald found out what the Pentagon has failed to give our military, but now, that’s all about to change.

As Commander-In-Chief, President Trump knows that our military needs his full support.

However, the fact remains that a lot of swamp slugs in Washington, D.C., namely, the Pentagon, want to keep the military and its servicemembers at the status quo, just like it was under the Obama administration.

I guess they’ve forgotten in the past year that America has had a new sheriff in town, and his name is Donald Trump. And President Trump has proven that he wants to spend the time and the resources to make our military as strong as ever, instead of running it into the ground like Obama did.

In fact, Trump’s latest announcement about what he is going to review should make the Pentagon nervous. Very, very nervous.

President Donald Trump said Friday that he would review policies that keep troops from carrying personal weapons onto military bases.

“If we can’t have our military holding guns, it’s pretty bad,” Trump said in a wide-ranging speech to the annual Conservative Political Action Committee conference in Maryland, “and I’m going to look at that whole policy on military bases.”

Schools and military bases currently are “gun-free zones” that are easy targets for deranged shooters such as the one in Parkland, Florida, who killed 17 at Marjory Stoneman Douglas High School last week, Trump said.

As Trump sees it, when it’s blared from the rooftops that there’s a soft target at hand, those with deranged intentions are more apt to focus on those spots as a potential area to wreak havoc.

Removing that from the equation just may improve the odds against another horrific incident from happening in the first place.

Defense Department policy mainly has been that base security is the province of military police. In most cases, troops are required to leave their personal weapons at home or check them at the gate in an effort to prevent accidental shootings and discourage suicides.

So will Trump’s pointed remarks directly lead to changes?

While we can’t say for certain which way the winds are ultimately going to blow, Trump has once again shown that he’s not going to let the noise prevent him from getting things done.

That’s what great leaders do, and it’s been on full display for all to see.