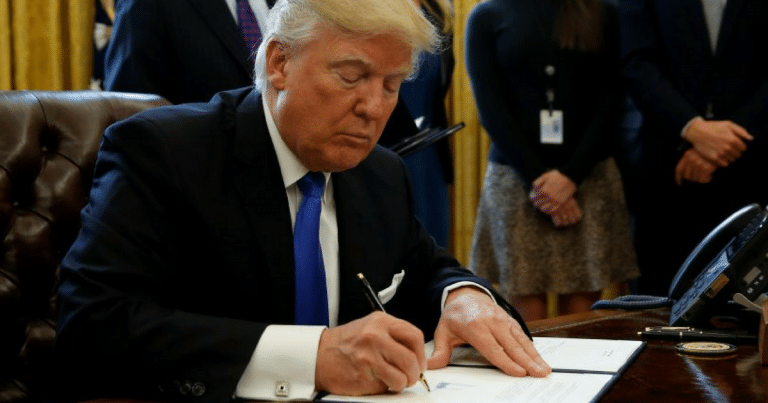 It’s rare that we get to hear directly from President Trump via the mainstream news.

We are so used to seeing the hatred expressed by most news outlets toward the Commander in Chief. Yet, there are still a few organizations that respect the office and the man.

President Donald Trump addressed the American people, through an article published by USA Today. On Tax Day, the President lays out the massive accomplishments his administration has achieved already. It hasn’t been two years into his first term and Trump has made good on some very big promises.

Despite democrat’s obstruction, the Trump administration has done much to make America great again. In his article, Trump goes over some of the highlights his White House has scored. But the biggest, by far, are the changes made thanks to his historic tax cut bill.

Simply put, Americans of all stripes are winning big. Jobs and the economy are responding.

This is the last year Americans will fill out outdated, complicated tax forms. In the years ahead, because I signed one of the largest tax cuts in history and the most sweeping tax reform in a generation, many Americans will complete their taxes on a simple, single sheet of paper. Remarkably, Congress had to pass this critical legislation without a single Democrat’s vote.

A typical family of four earning $73,000 a year can expect to see an income tax cut of more than $2,000 when they file their tax return in 2019 — slashing their income tax bill in half. The standard deduction has been nearly doubled, so now twice as much income is earned tax-free…

This year also marks the last time Americans will have to contend with Obamacare’s cruel individual mandate because our tax law repealed it. These penalties largely hit lower-income and middle-class Americans — 80{75726800c12fe2ebed14402fd98444a61f7eda42751f92330bc58faf20bd8821} of the penalties were paid by families making less than $50,000 per year…

On this Tax Day, America is strong and roaring back. Paychecks are climbing. Tax rates are going down. Businesses are investing in our great country. And most important, the American people are winning.

With all the hate spewed by the left, some Americans might not realize how much has changed. Thanks to President Trump, things are actually getting better. The economy is recovering faster than anyone expected. The GDP is on the rise. Businesses are hiring and raising wages. Consumer confidence is reaching new heights.

The biggest change is due to the historic tax cut bill. We haven’t seen taxes go down this much since Reagan’s era. The tax code is being simplified for many families. Next year, they will only have to fill out a single sheet of paper. Incredible.

Thanks to the Trump-led GOP bill, many families’ taxes were cut in half. Already millions of Americans have seen the results. The moment the tax bill was signed into law, taxes went down. Companies gave out bonuses, wage increases, and perks. Americans saw their paychecks get bigger.

Because of that, and his slashing of regulations, businesses are investing in the United States. Companies, both local and from around the world, want to build in America. That means more jobs and opportunity for Americans.

Do you really think this would be happening under Hillary Clinton, aka Obama 2.0? Things looked bleak under Obama. He even said jobs weren’t coming back. It would have only gotten worse, under Hillary “Open Borders” Clinton.

Do you think we would have gotten a tax cut if the Democrats ran Congress? Of course not.

Keep that in mind, come November. If the Democrats regain Congress, all this winning goes away.